Ananta Mandal is an award winning internationally recognized contemporary Indian painter. He is an expressive and imaginative painter. Mostly his paintings are created in impressionist manner and surrealist way in various mediums like watercolor, oil and acrylic. He lives and works in Mumbai, India.

He has evolved a highly individual style, deeply contemporary in its sensibilities. His paintings are best known for realistic urban landscapes. His brush stroke speaks of many things: the hustle and bustle of modern city life like Kolkata and Mumbai, figurative movements, horse in motion, charging bull, festive seasons, seascapes and lakes, the time endured old railway steam engine, Rajasthan desert, and the many moods of nature; where fluid moments are brilliantly captured by the artist. He has also gained recognition for his surrealistic paintings.

Ananta bagged many national and international awards. From participating in the most prestigious Harmony Art show, Mumbai in 2008, his excellent achievements include Award from Northwest Watercolor Society, Annual International Exhibition, Washington in 2017, the First Place Award from 36th International Exhibition at the Watercolor Art Society-Houston, U.S.A. in 2013, Award for Best Landscape in Watercolor from The Bombay Art Society, Mumbai, in both 2011 and 2006, and many more to mention. In 2016, Ananta was invited by the Indian branch of Faber Castell to test their new watercolors. His painting is featured in the front cover of their new set of watercolors.

He has continuously supported being part of fund raising charity art shows for numerous NGO and charitable trust in Mumbai, Delhi, Pune, Dubai, London etc. His artworks are also given to many art auctions to raise money for various social cause.

Besides involving himself in Workshops, he also keeps himself busy in making experimental art films based on paintings, Video Installations. Among his various passions, Photography also has a place.

His works can be viewed in numerous public and private collections worldwide. 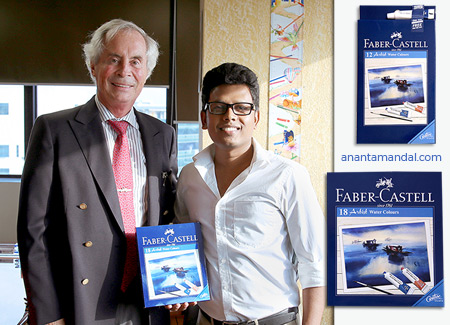 My painting on the Faber Castell watercolor front cover

It was a wonderful meeting with Mr. Andreas Graf Von Faber Castell, the Managing Director of Faber-Castell Ltd. to celebrate my painting to be the front cover of their new introduced watercolor. I was testing the colors from the primary stage and have shared my experience with the entire team involved. I felt the colors are of good intensity with transparency, purity and vibrancy. 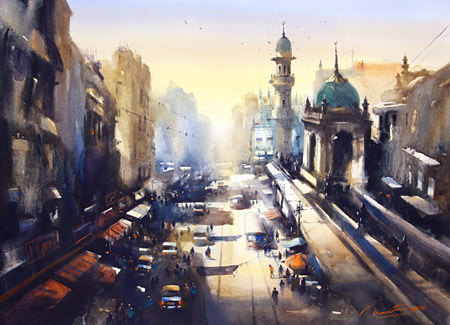 My painting Minara Masjid, Mumbai has been awarded into the Northwest Watercolor Society's 77th International Open Exhibition to be held April 25- June 2, 2017 at the Harbor History Museum, Gig Harbor, WA. Juror selected 60 paintings from around the world, among which one of mine has a place in this prestigious exhibition. 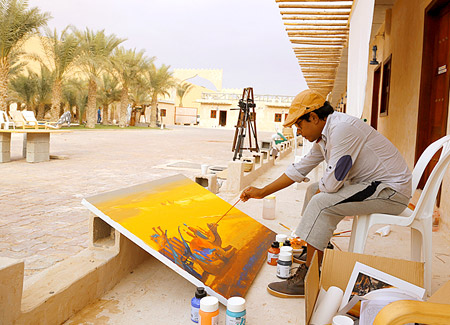 This is indeed very exciting for me to join the event Art for a case organized jointly by TellusArt and Abu Dhabi Art Hub. I appreciate the fact that this event provides an international platform for artists to live, create art, meet and work with the many artists from different countries around the world. It has been an enriching experience for me and for my artwork as well.

Ananta Mandal Bull paintings are specifically attracted because of their grungy grace and strength of survival which are absolutely instinct. Their power reflects their sublime antagonism.

Ananta Mandal Rising Horse painting from new series! with each passing time these days doing things different is a new move. In addition to this divergence it holds a special place for new Horse painting series. My passionate admiration for the animal drive my inner force to transform into the equine masculine anatomy. When they move with speed, their vitality looks so majestic, powerful and the eyes full of expression.

Ananta expresses his love for Mumbai on canvas

The young talent has more ideas

Mandal works encases the fusion of real and surreal